A letter from SWITCHFOOT'S John Forman 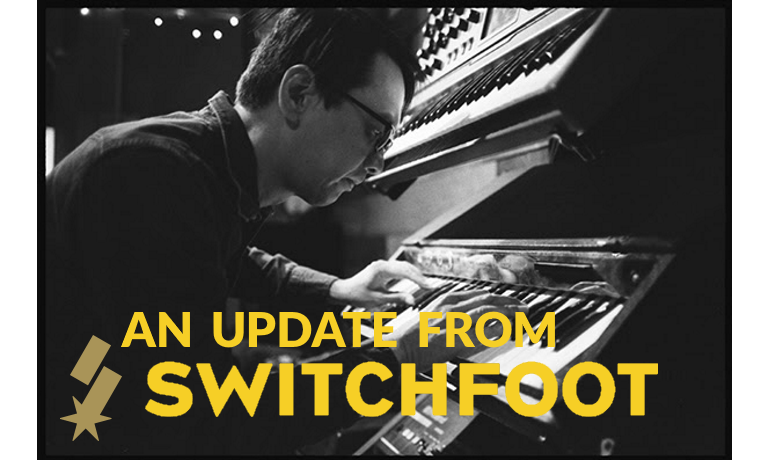 Jon here, I'm always blown away by the incredible community that sings these songs with us. Time and time again you will find ways to encourage, strengthen, and rally around the folks that need it the most. It’s with that in mind that I want to tell you some news, but first, a bit of context.

When I first met Jerome, he was the bass player in one of my favorite local bands, Fold Zandura. When they broke up, I called him up and asked him if he wanted to come and play music with us. The day that I called happened to be his first day of work at a “real job” in one of the tallest buildings in LA. He quit his job, called me back, and we’ve been playing music together ever since. The rest of our story includes family, songs, thousands of shows, and a journey that has taken us from California to Kolkata and back.

Jerome is one of the finest humans you could imagine. He is kind when I’m grumpy. He remembers names and faces when I forget. He eats healthy when I don’t. In decades of knowing Jerome, I have never once seen him angry (and I’m in a band with him!). I asked his brother about it one time, and he said that he had never seen him angry either. Suffice it to say, Jerome is one of my favorite people on the planet.

I got a call from Jerome a few weeks ago. He was calling with sobering news: he has cancer. One of Jerome’s kidneys has a large mass on it that has been growing for quite some time. The good news is that the cancer has not spread to his other organs. Removing one of his kidneys will hopefully be the first and final cure for Jerome’s fight with cancer. The surgeons and the medical team have been incredibly accommodating, making sure that the surgery was scheduled as soon as possible.

And so at the end of the month, Jerome will undergo surgery. He is making the best out of a hard situation. He’s in good spirits and is facing all of this bravely, (with his signature smile and laughter intact!). He wanted me to reach out to the beautiful community that has supported our band in the highs and lows to inform all of you of the situation. We hope that many of you will join us in praying for Jerome and his family during this difficult season.

Jerome sent me this note to pass on:

“I wanted to tell this community firsthand what is going on. It’s hard to think about being on the sidelines while we release this album. But the songs have meant so much to me, even through this experience.

We’ve been through so much as a band. This is just one more mountain to climb, one more storm to weather. I know we’ll get to the other side. And I look forward to having more reasons to be thankful when all of this is behind us. We will give you an update when we have news to tell you. Thanks again for years of love and support. Merry Christmas and Happy New Year to all of you, we look forward to telling you some good news in the near future."