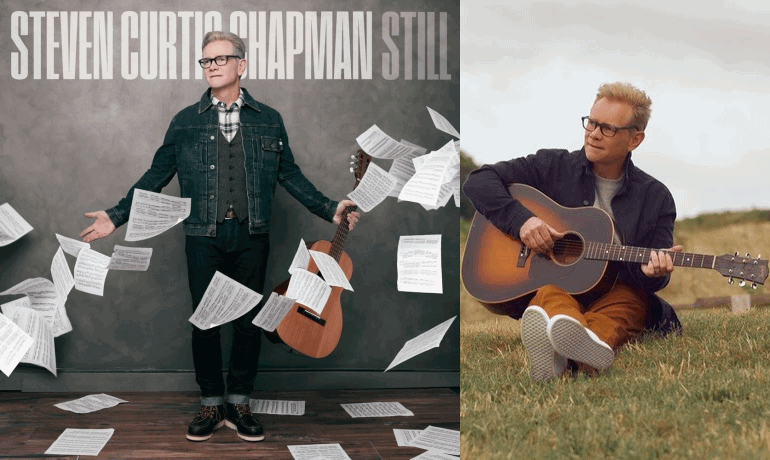 NASHVILLE, TN - Provident/Sony Music and Steven Curtis Chapman announce the October 14 release of his latest album, Still. A pre-order for the anticipated new album from the multi-GRAMMY® Award-winning artist/songwriter begins today along with three instant grat songs - the previously released title track, his current single "Don't Lose Heart," and "I'm Alive." A new music video for "I'm Alive" also drops today and can be viewed below.

The 12-track project offers, in true Chapman fashion, songs of encouragement and hope, especially “Don’t Lose Heart,” which was inspired by Chapman's own journey through the shallowed valley of grief and loss that he and his family have traveled. The honesty and truth to the upbeat single have quickly connected with listeners - it was the most-added song on radio for three weeks in a row and has already climbed into the top 20 in just four weeks.

With “I’m Alive” (listen here), he shares, "This is one of those songs torn from the pages of my personal journal, written during the craziness of the last few years. I hope it will be a 'both hands in the air anthem' for you as it has been for me!" He also gives a sneak peek into the making of Still in the “I’m Alive” music video.

Sharing about the album, "STILL is a celebration and a musical journey through much of what has been stirring in my heart and soul over these last few years, so mark your calendar for Oct 14th and get your ears and heart ready to take the journey with me," Chapman exclaims.

Steven Curtis Chapman has spent the last 35 years writing and performing genre-defining songs that shaped a generation. With 49 No. 1 singles in his catalog, he is the most awarded artist in Christian music history, winning 59 GMA Dove Awards®, five GRAMMY Awards, an American Music Award, and selling more than eleven million albums with ten RIAA-Certified® Platinum and Gold albums. Chapman is synonymous with contemporary Christian music, which is one of the many reasons he was honored for his prolific musical career as a BMI Icon Award recipient. He is the first Christian songwriter honoree, joining the elite list of songwriters, including Barry Manilow, Brian Wilson, Carole King, Dolly Parton, Kris Kristofferson, Merle Haggard, Sting, and others who have left an influence on generations of music makers and the music industry.

Still tracklisting:
Welcome Back To Wonder
Still
Don't Lose Heart
I'm Alive
Kindness
Running After You
Unfixables
Love Now
Where Else Could I Go
A Desperate Benediction (Peace On Earth)
Living Color
Trying To Get Back Home